Nudging for safe distance between cars

Cars often drive too close to one another. Adaptive Cruise Control (ACC) can automatically keep the distance safer, but many people who have ACC do not use it. Is a nudge enough to make them use it more?

Adaptive Cruise Control (ACC) is a remarkable achievement. While ordinary Cruise Control only keeps a set speed, ACC takes it a step further by also maintaining a safe distance to the car in front. To make this work, several sensors interact. Based on your speed and the distance to the car in front and its speed, it calculates an ideal speed profile in order to maintain a certain time gap between your vehicle and the one in front.

The key challenge with ACC is that many people do not use it very often, despite it being a common feature in cars today. Some might not be aware of its existence while others, for example, disregard it because they want to be in charge of the driving. But out of the people who know about it and yet don’t use it – might there be some that could be nudged to use it more? Pär Gustavsson from Volvo Cars is one of the researchers looking into this issue for MeBeSafe.

“We wanted to make people aware of ACC, and with nudging there is so much space to be creative! So we got together and held a workshop on how such a nudge could look” Pär explains.

The participants at this workshop came up with lots of different ideas, some more interesting than others. One of those ideas resonated really well with them, namely appealing to people’s love for orderly things.

“Many people really appreciate having good order around themselves. For example, at their desktops. If there were a simple button they could press to make everything orderly, a lot of people would likely choose to press it. And this is the basis for our design to make people use ACC more” Pär explains. 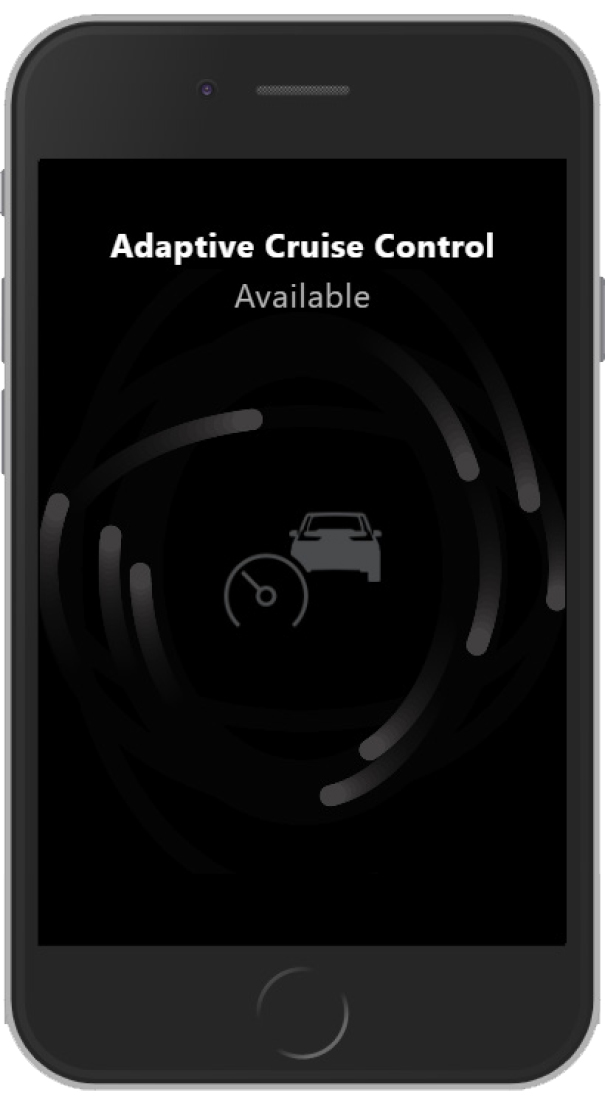 The resulting nudge, displayed on a screen inside the car, is an interface that consists of multiple dots moving around – seemingly without any plan. It might appear slightly annoying, although at the same time it has been designed to not distract people from driving. The good thing is, there is a simple way to create order. When you have ACC actived, the stray dots start to move into a circle, one by one, until all of them are flowing around in a perfect circle.

“We have set a goal of driving ten minutes with ACC per day. For each minute, you get another dot moving away from its chaotic bouncing towards the nice and orderly circle in the centre” Pär explains. “And as this actually is as simple as pressing a button, we believe many people will do it to get a nice and orderly collection of dots.”

ACC is however not the most obvious function in your car.  Without further clues, you could easily be misled to think that the dots mean something different. To hint that they actually are associated with ACC, Pär and his colleagues use a subtle message.

“We won’t tell people explicitly that it is about ACC, because that could bias the results. But the screen has a small text in the corner stating if ACC is on or off at the moment, and if it can be activated right now. Then you are free to make the connection yourself” Pär explains. 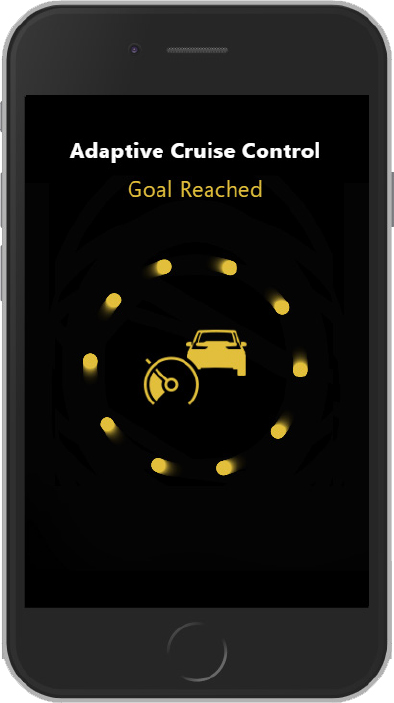 Ten minutes of driving with ACC might seem like a simple goal, especially if you are a long-distance commuter. After ten minutes of ACC driving, the dots won’t go back to being unordered, no matter how you drive the rest of the day. Still, the team believes that people will get inspired and keep using ACC, even after this simple goal has been achieved.

“When you’ve used it for ten minutes, there is no reason for you to turn it off.” Pär states. “You have likely gotten aware that the feature exists, or gained some more experience using it, and you won’t forget it during that trip.”

Alongside this, another approach – gamification – is being tested to increase the use of ACC. It is a popular method to increase engagement by introducing aspects traditionally related to the fun of playing games. For the ACC nudge, the gamification idea consists of a scoreboard, placing you among other based on how many minutes you’ve had ACC on and showing you what time to beat to be in the lead.

This competitive measure is also one to be tested by the Volvo team, as a way to check if people react differently to this compared to the nudging dots. The results indicate that ACC usage could increase 50-120%, depending on the implementation. Pär is positive. 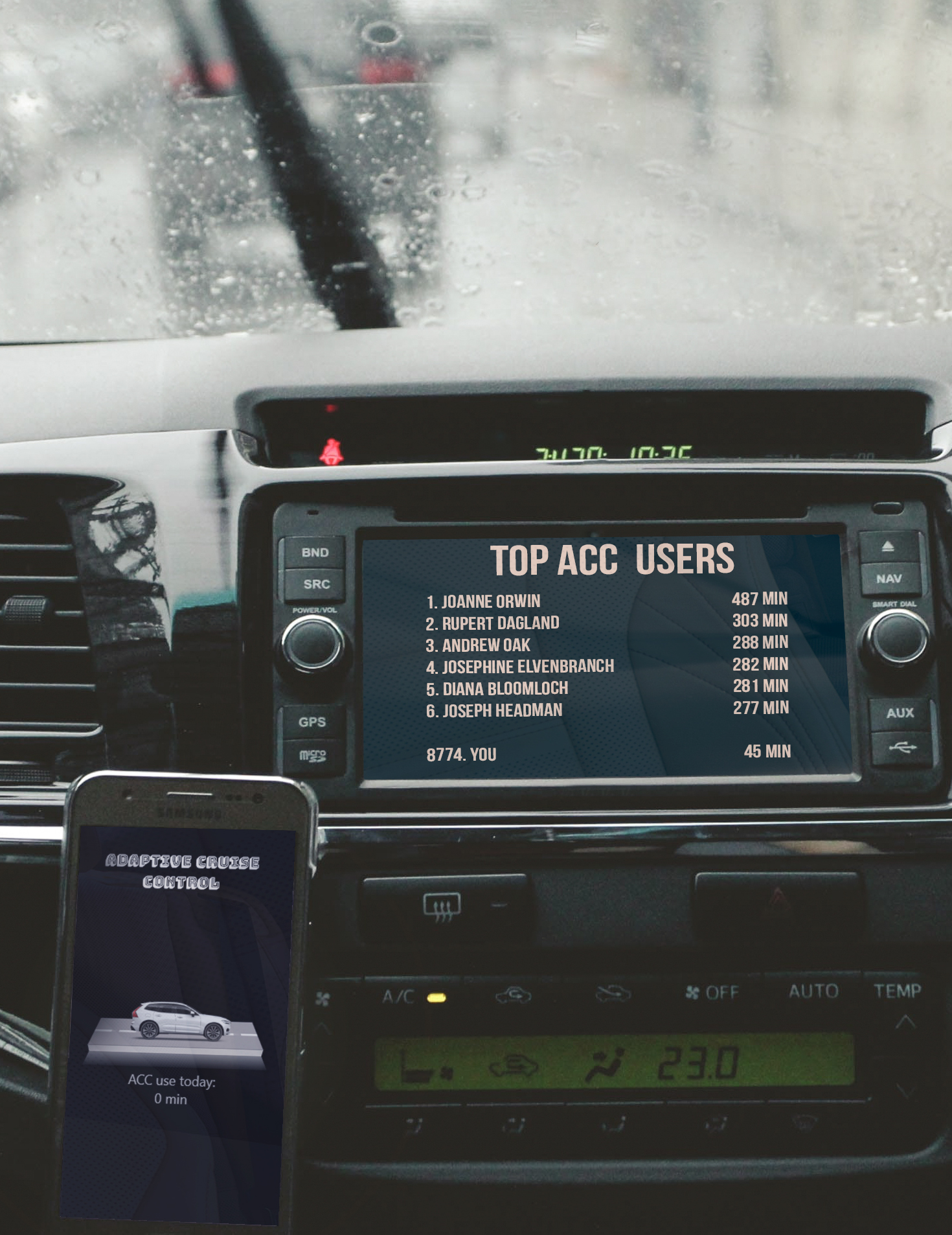 “Some people really seem to have increased their use of ACC, and that is really great. But others not so much – and you can wonder why. Maybe they belong to a different group of people that would respond differently to another measure. Many people have a strong competitive instinct, and they might be more compelled to increase their ACC use to win rather than getting an orderly desktop.”