Nudging drivers only when necessary

When you leave a motorway you should keep a safe, low speed – and nudging could help you reach this. But such a nudge would most often affect slow drivers as well – and slow driving close to a motorway could be dangerous. It’s time for adaptive infra-nudging.

Traffic has become a lot safer over the years. Roads are getting better and cars are getting smarter. But there are still some places where danger lurks in the shadows. Motorways are generally thought to be very safe, and that is true in the large terms. When you are driving on a motorway, accidents are normally very rare because the road is built to encompass the speed.

But when you leave the motorway, you run into roads not built for the same speed. Yet, in the often curved exits you could still keep a fair bit of your rapidity. And curves and speed could mean fatal consequences.

Reducing speed when leaving a motorway could therefore be a lifesaver, and nudging is a very feasible alternative. That is, if you are going too fast. But what if you are already driving slow, maybe far beneath the maximum speed of the motorway? If you would reduce that slow speed even more, you would have an ever increased risk of getting hit by a speedster prowling in from behind. So it is therefore essential that a nudge could be targeted to specific groups. And that’s where the main concept was born.

“Road marks are permanent. If they are there affecting one car, they are there to affect them all. So we started to explore other ways of giving away signals from the infrastructure.” Anna-Lena Köhler from ika at RWTH Aachen explains.

So the MeBeSafe team got together and started to ponder. The nudge would have to work over a distance – and not only at a single point like some kind of road sign. Speedsters should get help to reduce their speed during the entire exit. But the contraption should also be able to switch on and off. Maybe it could move alongside the car?

“We had a lot of ideas on how to do this” Anna-Lena states “And many of them could be made by using projections on the road.” Projections was indeed a sweet spot for many of the different teams in MeBeSafe, as they could provide new exciting ways to convey the message. But two things served to throw spanners in the works here. First the technical limitation. If a projection is to be seen in daylight, it has to be stronger than the sun – and that’s very hard to do. But even if that could work, it would most likely be used for intricate and unusual images – not normally seen on the road. This could take up way too much attention from the drivers that they had to process. It had to be simpler.

That’s where the ingenious idea was born. Why not use roadside lamps to nudge people? Lamps are truly omnipresent in traffic, and will most likely not be as distracting as a totally new thing. A long row of lamps could be placed along the roadsides of the exit, and the lamps could be lit up to make it seem as the light itself is moving. And lights moving towards you could give an illusion that you are driving faster than you are. This seemed like the perfect solution.

“We set up a real road exit in our driving simulator in Aachen, and tried three different ways that the light could behave” Anna-Lena excitedly exclaims. “First, the lights were lit up as any regular light, secondly they were blinking and thirdly moving towards the drivers. A lot of different colours were tried, and we also measured how much attention it took away from people.” 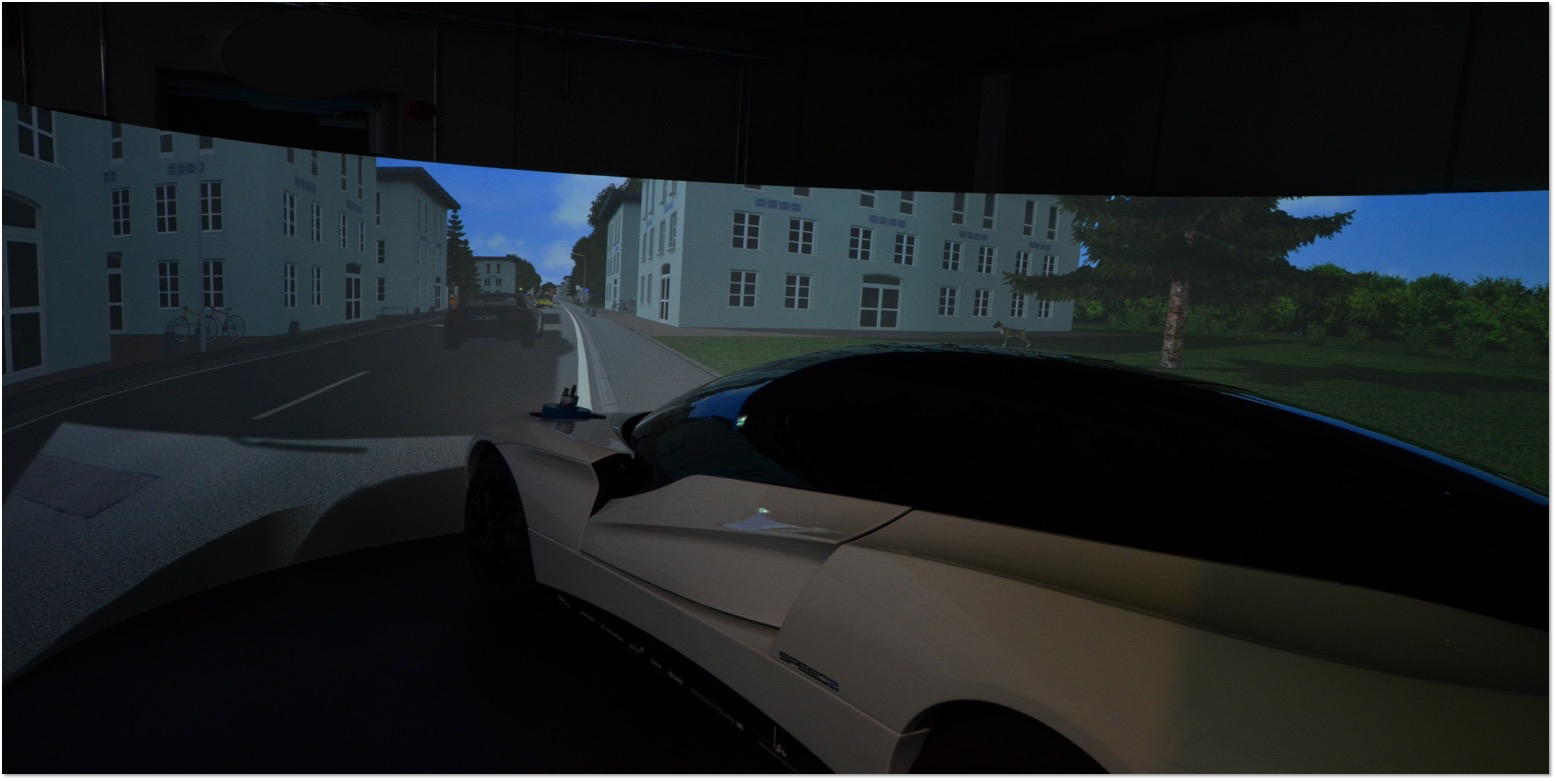 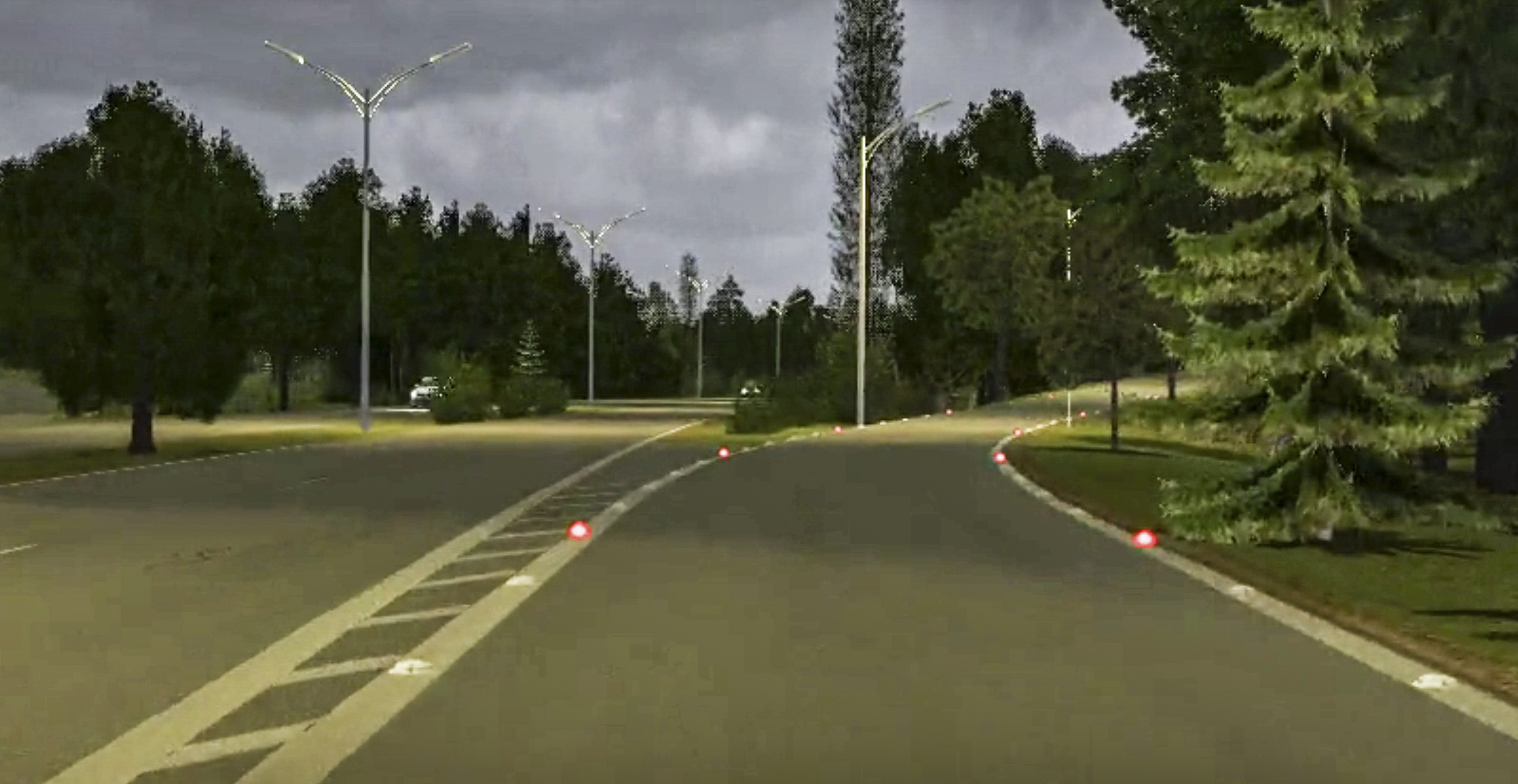 The simulator studies were a success. They found that drivers were indeed affected by the nudge. The results were further verified by trying an opposite mode; would moving the light away from the driver increase their speed? Drivers got to experience this and were interviewed about it, and it really seems that it would. So the lights were indeed able to influence the drivers’ speed. But all of this naturally had to be tested in a real world as well.

The construction company Heijmans succeeded in bringing the nudge to the roads, in close collaboration with ISAC and

ika. After little more than a year, the idea had actually been brought to life. And now the work has just started. A sophisticated system built by the ISAC monitors the traffic from above and decides when the nudge should be on and off, but it also collects the data on how everybody has fared.