Rumble stripes and bumps are popular with lawmakers and despised by cyclists. MeBeSafe has found that solely visual nudges have much better effects on speed and spouts a universal approval by cyclists.

Intersections are dangerous places. Eight of ten accidents between cars and bikes happen there, and the car driver has most often not seen the cyclist. Instead, drivers often believe that cyclists just appear in front of their cars, without any prior hint of their existence. It would therefore make total sense if both cars and bikes adopt their speed before dangerous intersections. Keeping a lower speed for a longer time will of course make it easier to spot one another, and therefore decrease all types of conflicts. Moreover, lower speed will increase the own marginals for braking.

Nowadays, cities often try to decrease cyclist speeds by rumble stripes or bumps on the biking lane. Not only are these stripes despised by cyclists; they are also not really decreasing speed at all. If anything, they seem to decrease the attention to the surrounding traffic. MeBeSafe has tested various haptic measures and indeed found that the effect is almost negligible. Read more on this here.

Would it be possible to make cyclists more aware when dangerous intersections approach so that they adapt their speed accordingly – without using any uncomfortable vibrations? Preferably, could they be nudged to do so on a subconscious level, so no active thoughts have to be devoted to the task? This was the question Chalmers wanted to answer. Bucketloads of ideas were tested in a long session of trial-and-error prototyping. Many were of course not even feasible. Projecting a moving stopline along a sidewalk, how would that even work without a lamp stronger than the sun? But some of them proved to fit like a glove. 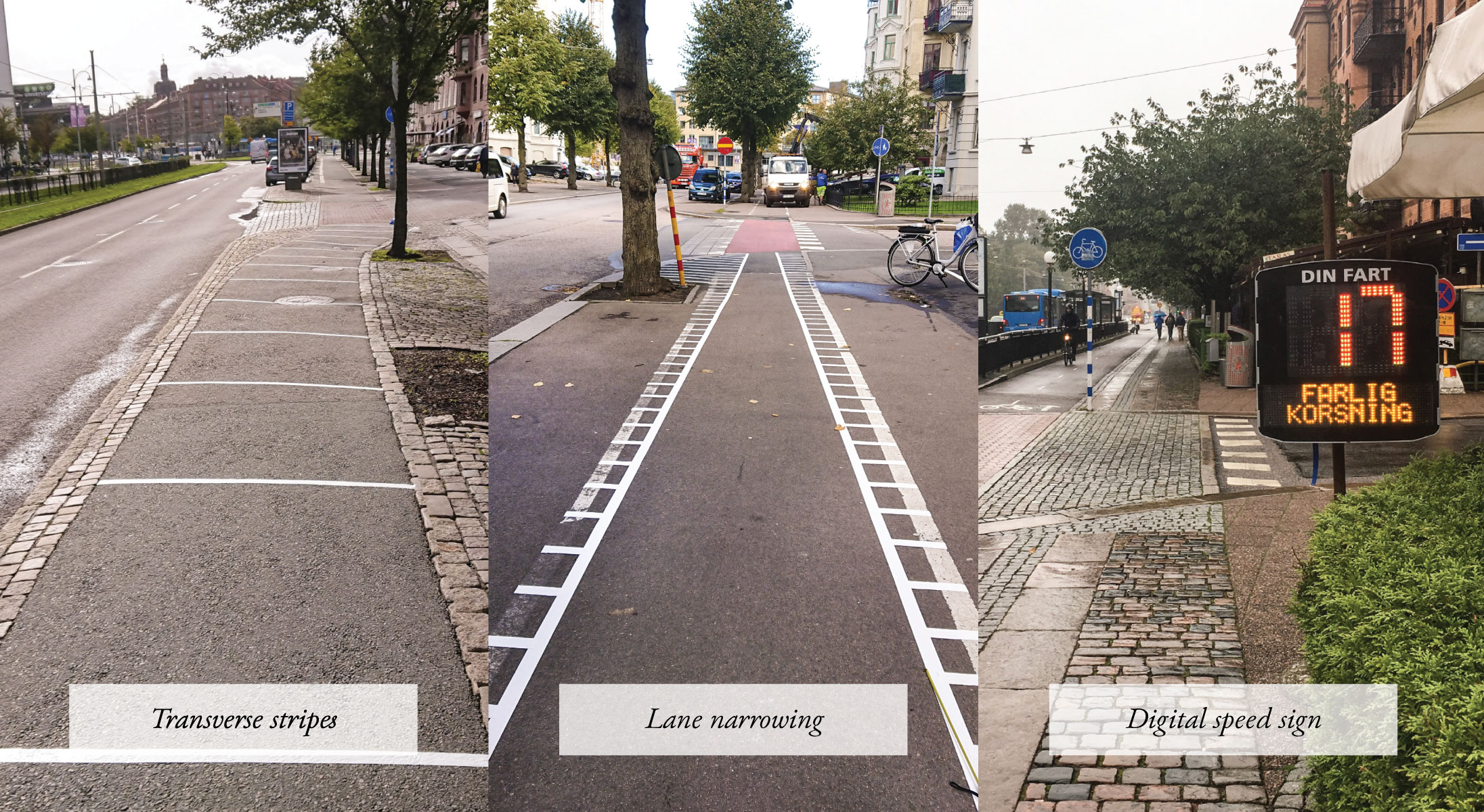 Three types of nudges were tested on 93 cyclists in a real-life scenario. Each nudge type was made in two configurations to find the optimum. The first was an array of totally flat stripes across the biking lane that got closer and closer together. The second was made of parallel lines gradually narrowing down the marked part of the biking lane. And the third was a digital speed sign showing cyclists their speeds and warning them for a dangerous intersection if a speed was found dangerously high.

And did they have effect! The effect on speed was dramatic, much more than haptic alterations could achieve. The speed sign would of course only work if the cyclists had seen it, but the other nudges actually worked just as good even if they were not noticed. Cyclists who always slowed down before intersections and cyclists who never slowed down before intersections; all were actually nudged to an equal and high speed decrease. No matter if they were old, young, fast, slow, risk-taking or safe; all of them were clearly affected to adjust their speed on a subconscious plane.

The effect was remarkable and totally unprecedented, but the appreciation was just as high. The nudges were not only appreciated by cyclists, they were universally approved. Nobody would mind having them on the biking lanes. They did not protrude upwards and seemed like relevant marks in a cluttered traffic environment – that was not even noticed actively.

It is certainly important to use such mindboggling tricks with high caution. They should only be used when the speed really has to be adopted. If the bicycle is to stand as a competitive and attractive mode of transport, the average speed on biking lanes should if anything go up. But for the sake of all road users’ safety, speeds of both cars and bikes should decrease in intersection scenarios.

MeBeSafe is addressing the issue both from the car and the cyclist perspective, and this reserarch suggets that the coast is clear on the cyclist side. As the nudges works subconsciously, they likely to work even over an extended period of time. This only needs to be verified in the field trial. So in a near future, lives can hopefully be saved by discrete and comfortable measures that only can be seen. Although they do not have to be seen at all.